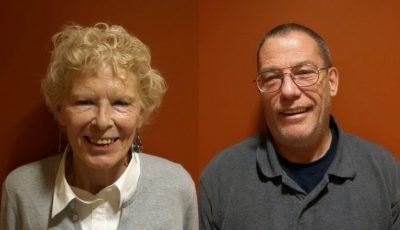 The Gardiner Museum of Ceramic Art, in partnership with the Toronto Community Hep C Program (TCHCP), invited people with lived experience of hepatitis C to take part in an art project called The Face of Our Story.  In that project, clay tiles depicting stories of lived experience would be displayed at the museum on World Hepatitis Day, July 28, 2016. This is the story of Signe and Tom who participated in the event.

The day arrived when we met with museum staff, were given a tour, and the project was explained to us. We were nervous.  We were proud to be part of this experience, but at the same time unsure of our surroundings and what was expected of us. None of us had ever put on an art show in a museum. We spoke in hushed tones and experienced a feeling of reverence as we saw the beautiful work of other artists. We exchanged glances and thought, “Uh oh! What are we doing here?”

We were a mixed group but what connected us was our involvement in the TCHCP. Most of us had used drugs in the past and some of us still did. We, as a community, were often passed over, regarded with disdain by the healthcare system. Many of us had waited decades to access hepatitis C treatment, and we did not want others to share that same fate. But the TCHCP had accepted us as we were and treated us with dignity. We all firmly believed that this was as it should be, and we could speak the issues through the art.

The first week was the hardest – only for a moment though. There was a quiet hush as we took the first steps on this journey. Focusing on our work, having fun, and rediscovering a childlike enthusiasm galvanized us. As the weeks went by, we became more comfortable with our surroundings, with each other, and with our art pieces. We were totally immersed in our own creativity, as well as taking pleasure in the accomplishments of our fellow artists. We worked, talked and shared our experiences with Hep C.

It wasn’t long before our tiles began to take shape. We were creating something substantial and enduring, taking pieces of ourselves that had been hidden and sharing them with the world. There was no competition, just a desire to be a strong voice where once there had been none. The exhibition would be a statement of our collective worth.

Signe wanted to use her tile to express the stigma, discrimination and longevity of her experiences with Hep C. She represented the length of time she had lived with hepatitis C with the “OM” symbol because it had been a quarter of a century since she had been to India and also exactly 25 years since her Hep C diagnosis. She simply carved the words “stigma” and “discrimination” onto her tile because it was the simplest way to convey those ideas. She felt very strongly that her tile should have a political message.

Tom’s tile shows his journey through drug use and street life. All around the image of his face are depictions of various times in his life – events from childhood to the present. The colours reveal happier and sadder times. The splatters that mar the face represent moments when he felt abandoned by his family. His tile symbolizes his transformation.

World Hepatitis Day came. What a triumph! Walking into the exhibition space and seeing our art framed and displayed on easels…we had arrived. There was majesty to the space. We were all so proud of ourselves and of each other. The hours of work it had taken to finish the project taught us the rewards of long-term gratification. We were jubilant!

The evening began with statements from the different groups that make up the community of the TCHCP. The most impactful statement came from Michael James McKeown, another participant of the program who had been invited to speak about his individual experience. We were all incredibly touched by his courage and dignity in the face of his imminent death from liver cancer caused by untreated hepatitis C. He was the embodiment of The Face of Our Story. Michael was a valued member and leader of our community, and he died peacefully the following day.

We began this process as individuals. We emerged not only as artists, but as people who had discovered our collective strength as a Hep C community.

Check out the 18 artists’ tiles below. Click on thumbnail to read a statement about their art work. 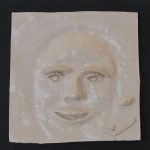 An unfinished business, A work in progress. -Tracey 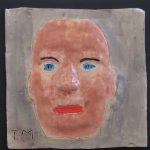 Having Patience If you wait long enough, good things will happen. That’s why patience is a virtue. -TM 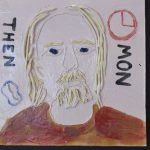 Misinformation: They told me my hep C was dormant. Frustration: The only cure for the longest time was brutal and not sure. Salvation: Finally I was saved by compassion and new research. -Thomas G. Newman 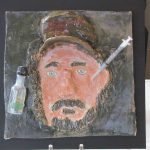 Drinking and drugging has aged me before my time, especially my health. After ten years of clean and sober living I’ve succumbed to my addiction once again. I quit, quitting! But since entering the hep C program and given the opportunities the program has offered me – especially projects like the art projects – this has for me added more years to my life and given me hope that I can add more quality to the life I have left. -Steve 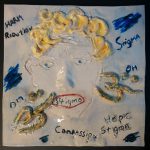 The Face of My Hep C We have lived together my Hep C and me for four decades Before anyone knew much about it…or cared A disease of intravenous drug users…no one cared Not too important in the eyes of the world, we. Hep C lived off my liver in my 30s and 40s when I went back to school and got my MA No one cared In my 40s I met and fell in love with my soul mate Hep C feasted on my liver still No one cared Into my 50s and 60s my Hep C continued its progression No one cared Intravenous drug users were not worthy of care Then in my late 60s…Someone Cared And my Hep C lives with me no more! -Signe 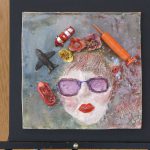 This piece is a small demonstration of my life. How you go from living on the cusp, and going to a healthier, better, stable life. -Rosemarie 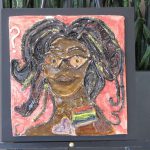 Along my journey I got a lot of education. I’m lucky, one of the fortunate ones that is going to get treated. So many people don’t even know they can be treated. I put in a heart, because I have lots of love for people. I put in a question mark, because I question everything. I put in a rainbow to represent gay pride. And all the colours, because life is a rainbow – it’s bright and colourful. -Mona 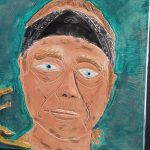 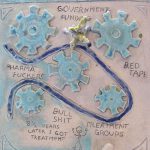 Machinery of Government Sucks Government purse strings being so short and greedy pharmaceutical companies, overpricing their drug, red tape and bullshit. Finally, eight and a half years later I got treatment. -Mike 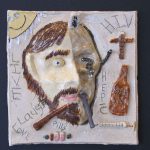 Marginalized Truth People living with HIV and hep C who use substances are experiencing barriers to treatment. When you have both you should automatically be able to access the cure for your hep C. People who are refused treatment, they can’t get government funding because their liver isn’t sick enough. Plus living with both can cause complications that can lead to death. Having both HIV and hep C is stigmatizing. Using drugs adds an extra layer, but isn’t a reason to be refused. This is life and death. -Marty 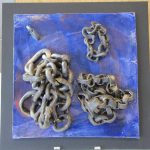 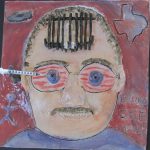 It’s been a long, hard, bumpy road. But one day I’ll make it to the pavement. -Howard 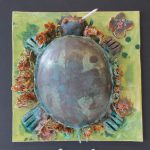 The turtle represents life. Represents my life and struggle. No matter what I do, I keep moving forward. Slow and steady. -Keith 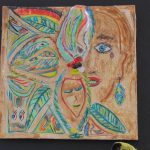 It was 8 years waiting for the treatment. I was told I had to stop drinking for a year and I said, no forking way. I’ve been through hell and back, but now that I’m hep C free, I’m now clean and sober. Before, I felt dark and dirty. And now, being me, Heather (the flowering shrub) – I’ve bloomed, I’ve flowered. “It’s not impossible, I’m possible.” “Healing doesn’t mean that the damage never existed, it means the damage no longer controls my life.” -Heather L. 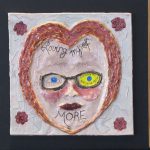 Loving My Self More Regent Park Community Health Centre helped me see that my health is important, which helped me to seek treatment, a cure for my hep C, which in turn made me love myself more. -Heather G. 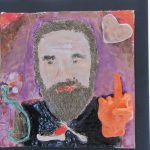 F.T.W. I’ve lived my whole life in search of true freedom, not the crap that they hand us. Fuck you, to anyone who thinks it’s otherwise. They call us outlaws, criminals, outcasts, sociopaths if we don’t see things their way. This is not freedom. Freedom is simple. It is to be free to do whatever I want as along as I am not doing it to anyone else. -Craig 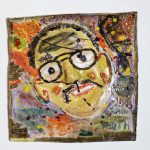 Here I Am No matter how scared, wounded and hurt I have been, I manage to see colour in the world. Bright futures. Through the benefit of the hep C treatment program, I managed to apply the wonderment of my own arrival. Now I not only have a life to live, I live the life. Here I am. -Thomas Barnard 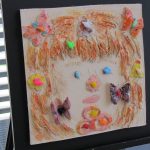 Butterflies, Life and Freedom I would like the world to know that there is no shame in having hep C. This is my metamorphosis to my freedom. This is my journey. -Alison

Signe Dewar is a harm-reduction advocate, an occasional drug user (and proud of it), and has been involved with the TCHCP since February 2016. She has a Masters degree in Political Sociology from McMaster University. She had hepatitis C for decades, and was finally cleared of the virus in May 2016.

Tom Barnard is a stand-up comedian and advocate for the TCHCP. He joined the program in 2011, and was cured in 2016. After a lifetime on the street, he is now stably housed, employed, and a part-time student.

Signe and Tom are both members of the TCHCP’s Patient Advisory Board. They would like to acknowledge Annika Ollner, Hepatitis C Program Coordinator at Sherbourne Health Centre, for her support with this article.