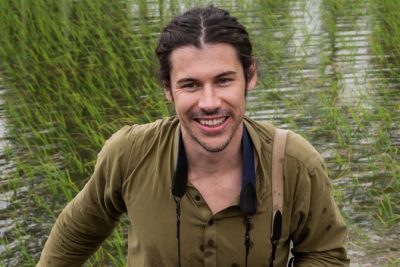 In 2018, I had the opportunity to spend time in Iran profiling an innovative hepatitis C treatment project for people who use drugs. In partnership with Iranian and Australian researchers and local service providers, I interviewed a number of researchers, clinicians and patients to showcase their success at curing hepatitis C despite stigma and other barriers.

As an Australian filmmaker, I have spent much of my working life telling stories of social change with communities throughout Asia, the Middle East and Africa. Yet stories from Canada and North America had remained the most unknown to me.

That all changed in 2019 when I had the opportunity to visit Canada for the 8th International Conference on Hepatitis Care in Substance Users (INHSU 2019). The International Network on Hepatitis in Substance Users (INHSU) and CATIE asked if I could add a few weeks to my visit to profile another set of hepatitis C treatment programs – this time in Canada.

For several weeks before the conference, I spent time with the patients and providers of innovative hepatitis C treatment programs in three distinct regions of the country: the Ahtahkakoop First Nation in a rural area of Saskatchewan, the Toronto Community Hep C Program in Canada’s largest city, and diverse programs in and around the predominantly French-speaking city of Montreal.

Three plane trips and a few days later, I found myself in Saskatchewan, driving a rental car north from its largest city, Saskatoon, on the right (wrong) side of the highway. My destination was a small First Nation called Ahtahkakoop.

Ahtahkakoop means “star blanket” in Cree, and is an Indigenous community nestled around a serene lake. It is home to roughly 1,600 Cree First Nations people. From the moment I walked into the Ahtahkakoop Health Centre one morning and sat down to chat with the staff over a cup of coffee, I knew that my time in the community was going to be memorable. One of the memories I will never forget was driving up the largest hill in Ahtahkakoop to see a cross and plaque commemorating those in the community who were forced to attend residential schools as children. One of my guides, Elder Kathy Ahenakew, shared with me her own stories from residential school. I struggled to fathom the trauma and pain she and so many other Indigenous people in Canada faced as children. But as our tears flowed, she reminded us to look around and admire the beauty and richness surrounding us.

Soon we were wiping away our tears, and Kathy had us on the lookout for tufts of sweetgrass, which she was collecting. When she had a large enough handful, she created a sweetgrass weave, which she gave to me as a gift and a blessing for my home. That weave still rests above my bed in Sydney, Australia. Many other community members told me stories like Kathy’s. Although these stories were not directly related to the hepatitis C treatment program at the Ahtahkakoop Health Centre, this was the context they wanted to share with me. The rate of new hepatitis C infections is three times higher among Indigenous people living on reserves than in the overall Canadian population, and this is no accident. The trauma of colonization, including residential schools and loss of family and culture, has produced lasting effects – including higher rates of injection drug use and associated health risks.

My time in Ahtahkakoop came and went by quickly. Before I knew it, I was saying farewell to the passionate group of women working at the Ahtahkakoop Health Centre. Although it had only been a week, it felt like I had gotten to know them for an entire summer. As I drove back down the highway to the airport and reflected on their hepatitis C model of care and why it had been so successful, I settled on two key aspects: the importance of relationships and the way culture was integrated into the delivery of care. The sweet silence of Ahtahkakoop quickly disappeared as I found myself in the midst of life in Montreal, a big city with more life and stories than most.

I began by visiting Centre Sida Amitié, a local HIV and hepatitis C service provider in Saint-Jérôme, a suburb of Montreal. The centre was founded by Dr. Jean Robert in 1991 to provide services and support to the community related to sexual health and infectious diseases. While the organization’s work has grown and diversified, a central element remains the relationships between doctors and patients.

As I joined Dr. Jean Robert for appointments with some of his patients, I was moved by the tenderness and attentiveness he demonstrated with his patients. One remarkable feature of this clinic was the wall of photographs of people cured of hepatitis C, beaming in front of the camera, proudly displaying their printed certificates that said they were hepatitis free.

Robert was one of these patients. I joined him for a walk around the local neighbourhood, and he described how his first interaction with Dr. Jean Robert many years ago had opened a door of trust. Over time, this grew into a long-term relationship with Dr. Jean Robert and Centre Sida Amitié that has lasted until today.

Dopamine is a grassroots organization in the more central Hochelaga neighbourhood of Montreal. For the past 25 years, their work has focused on supporting and working alongside people who use drugs, their families and friends, and neighbourhood residents. In recent years, Dopamine has worked with Centre Sida Amitié to provide their model of healthcare delivery in a safe and supportive space for the community they work with. In early 2019, Dopamine launched a small clinic out of the basement of their day centre. “Dopamed” draws on the organization’s operating philosophy, employing peer navigators Simon and Sophie to work alongside the doctors in the clinic. When I visited the clinic, Simon was baking a fresh batch of muffins for the clients in the waiting room.  Simon has found medical services to be, in his own words, “pretty crappy”. But the combination of peer workers and doctors working together at Dopamed has worked for him. As an indication of its popularity, the clinic doubled its weekly operating hours after its first year. The third and final stop was to Canada’s largest city, Toronto. Arriving on highways that passed iconic buildings and a sea of new construction, I found myself arriving in South Riverdale, a community in the east end of downtown Toronto that seemed to move at half the pace of the city’s hustle and bustle.

My week in Toronto was spent immersed with the Toronto Community Hep C Program, a partnership between three inner city community health centres. With similar client bases that include people who use drugs, it made sense that these three health centres would work together and build a single model of care, supported by infectious disease specialists at Michael Garron Hospital.

A unifying thread throughout the project at all three centres was the meaningful involvement of people with lived experience of hepatitis C and drug use. In fact, many of the current program staff are former participants. After learning that he had hepatitis C, Rick was connected to the Toronto Community Hep C Program, where participants meet on a weekly basis for a warm meal and a catch-up. In this program, participants’ basic needs are treated as a priority, and hepatitis C treatment is always secondary.

Two weeks after completing his three-month treatment, Rick returned to the South Riverdale Community Health Centre to hear the news he had been waiting for: he had been cleared of hepatitis C.

For Rick, clearing hepatitis C gave him greater confidence that he could achieve similar outcomes in other aspects of his life, such as securing more permanent housing. Since graduating from the treatment group, Rick went on to begin the peer training program, and he hopes one day to be employed as a professional with lived experience.

During my month in Canada, I met so many incredible people, learned so much from them, and was able to answer many of the questions I had about this country before arriving. I left with a wealth of stories from the three models of care I witnessed in Ahtahkakoop, Montreal and Toronto, and with a deep appreciation for the organizations, their staff and the service users who shared their stories so openly with me.

My one overarching takeaway from Connecting with Care in Canada is that relationships rule. The strength and success of these three models of hepatitis C treatment are tested through the relationships forged with community members. Such relationships translate into genuinely affirmative healthcare experiences and open further possibilities for meaningful engagement with care. Conor Ashleigh is a storyteller and a communications strategist, working with organizations to drive social change across the world, from Africa, to the Pacific Islands, Asia and now Canada. The photos in this blog were taken by Conor and published with his permission. To view his work, visit www.conorashleigh.com.

Leave a Reply to This Family We Love Cancel reply